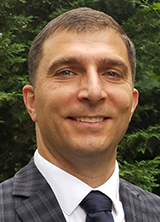 We don’t believe fossil fuels are evil. We like collaboration and being open-minded. We like stable cash flows, bright growth prospects, and healthy risk-adjusted returns. On July 29 the Energy Infrastructure Council (EIC) officially expanded into Renewables Infrastructure, an emerging subsector with positively trending fundamentals and a strong mandate from Main Street. This subsector is relatively unknown, perhaps in the same way MLPs were relatively unknown around the year 2000.

Other than the stock chart, what gets us excited about Renewables Infrastructure? 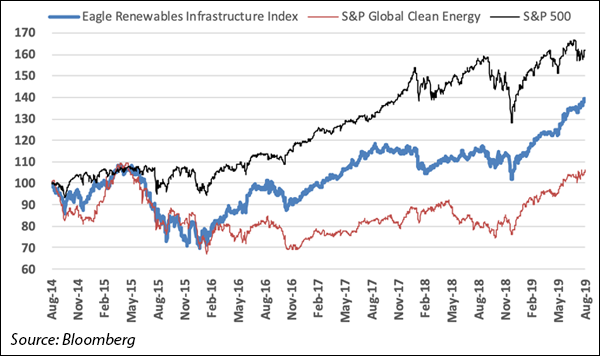 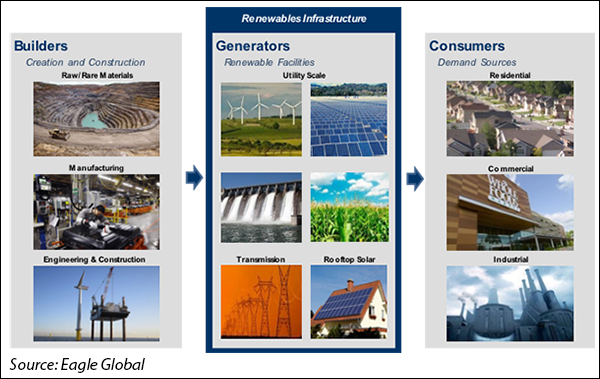 The build characteristics of these assets are similar to traditional energy infrastructure, in that companies are unwilling to invest multiple billions of dollars without first securing long-term contracts. Within renewables, these contracts mostly come in the form of power purchase agreements (PPAs), where end-users agree to pay a specific price for as much electricity as the asset provides. Counterparties are typically investment-grade, demand-pull customers willing to sign contracts for 10+ years of renewable energy security. These are almost always local electric distribution companies (i.e., utilities), though they can also be large-scale commercial entities or smaller-scale communities that want to add a renewables component to their energy mix.

The end result of these arrangements are stable, long-term cash flows that support the dividends that income-oriented investors want. We hear all the time from investors who are searching for yield—so often, in fact, that our firm recently wrote a white paper titled “Where Is My Yield?” on this very subject. The yield for Renewables Infrastructure (RENEW) is currently 5.1%, ranking it right behind MLPs among yield-centric sectors. 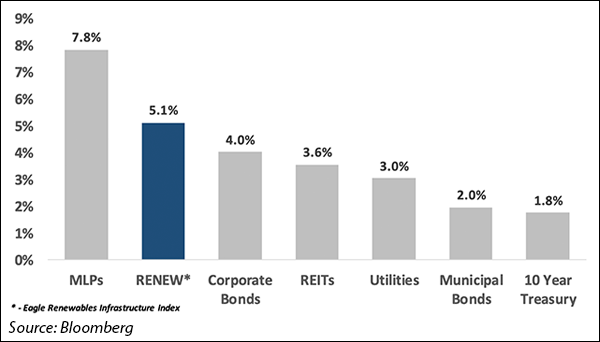 The history of renewable energy and investment in renewable energy conjures images of uneconomic businesses kept on life support by government subsidies. It’s no surprise that government support has provided substantial help to renewables over the last few decades, though it may be a surprise just how much progress has been made. In the United States during the 1980s, wind turbines producing 100 kilowatts (KW) were mounted on 65-foot towers with rotor blades roughly half that length; in 2018, turbines averaging 2.4 megawatts (MW) are mounted on 290-foot towers with rotor blades 190 feet long! Meanwhile, wind turbines approaching 10 MW are in development for offshore wind farms, where space is less of an issue.

The vast majority of costs associated with renewables are upfront, during the construction phase, so creating economies of scale is critical. Historically this has been done through engineering improvements and reducing construction and material costs. We have no reason to believe productivity gains will stop as we progress further into the era of big data. We’ve already seen substantial growth in renewables market share of electricity generation, and the Energy Information Administration (EIA) forecasts this will continue far into the future, even as government subsidies diminish. 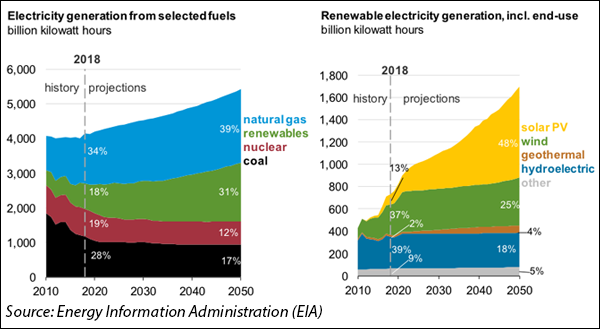 Opposition to renewables tends to focus either on outdated notions of economics or on the intermittency of the power sources. The sun doesn’t always shine and the wind doesn’t always blow. We think it is best to view renewables not as a replacement for fossil fuels, but as a complement. Renewables are powerful energy sources that make both economic and environmental sense, and also work well with the reliability of fossil fuels. Capital will seek and find economic opportunity.

It’s not just a groundswell of support from John Q Public. The billions of dollars expected to be invested in renewables over the next several decades are increasingly based on economics. It’s our opinion that Renewables Infrastructure is the prime public vehicle to benefit from this megatrend.

We think many investors consider the initial complexity of financing Renewables Infrastructure assets a hurdle. Questions about what happens at contract expiration represent another hurdle. We’re less concerned about the former, but admit the latter is open for debate.

The major source of funds for renewables projects are the debt markets, though tax equity financing and common equity proceeds have meaningful roles to play. Although upfront leverage can be high, principal payments are made during the contract life, resulting in the asset being debt-free at contract expiration.

The larger debate surrounds what to do at the end of an asset’s operational life, though even here companies have options. They can keep running the asset and sell power into the spot market. They can secure a new contract justifying any number of “brownfield” projects to replace or upgrade existing equipment. Assuming demand holds steady, a brownfield project should find it easier to re-contract than a brand-new “greenfield” project. This is similar to how existing oil/gas pipeline economics beat new-build oil/gas pipeline economics, assuming no change in the supply source and demand center.

At the security level, Renewables Infrastructure also offers a compelling risk-adjusted return. Despite the still emerging nature of the subsector, Renewables Infrastructure’s volatility screens well against both the S&P 500 and other comparables, as shown in the chart below. Of course, past performance is no guarantee of future performance, though we believe stock performance data supports our view that the sector is inherently defensive—even boring, if you will. 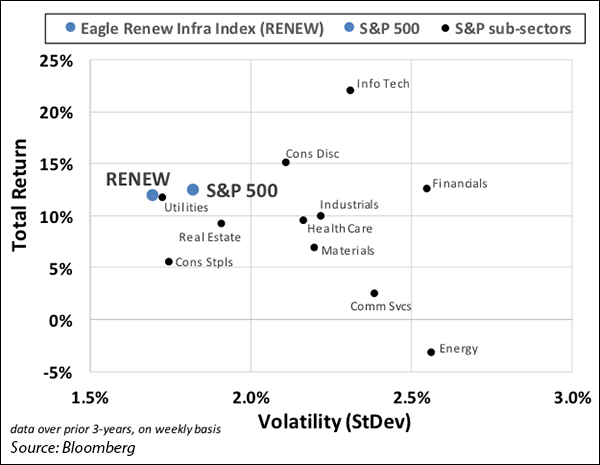 Putting the “E” in ESG

It comes as no surprise that Renewables Infrastructure companies score well on ESG metrics, led by the “E” (Environmental) and to some extent the “S” (Social). To be fair, the sector scores poorly on the “G” (Governance) due to complicated structures and sponsor alignment issues. Perhaps lessons from new partners in the EIC could help solve this issue. In the meantime, Renewables Infrastructure, as a whole, scores very well on ESG metrics, providing another tailwind in a market that is increasingly searching for positive trends. According to Morningstar, net inflows into U.S.-based ESG funds for the first half of 2019 was $8.4 billion, a figure that already eclipses the $5.4 billion added in 2018 and pushes the total since 2013 up to $35 billion. Wouldn’t it be refreshing to have environmentalists on your side for once!

To end where we started, we don’t believe fossil fuels are evil. We like collaboration and being open-minded. We like stable cash flows, bright growth prospects, and healthy risk-adjusted returns. We believe Renewables Infrastructure is here to stay.

Michael Cerasoli serves as a portfolio manager and investment analyst covering master limited partnerships and renewable energy infrastructure companies, and is a member of Eagle Global’s investment committee. Prior to joining Eagle in May 2014, Mr. Cerasoli was employed by Goldman, Sachs & Co. for ten years where he covered MLPs for seven years and small/mid-cap oil services for three. Prior to working at Goldman, Mr. Cerasoli worked for three years as a sellside equity trader at various Wall Street firms. He earned bachelor’s degrees in Economics and History from Union College, and a master’s degree in Business Administration from the Hagan School of Business at Iona College. Mr. Cerasoli holds the Chartered Financial Analyst designation.