The REIT Newsletter for Advisors • Fall 2022 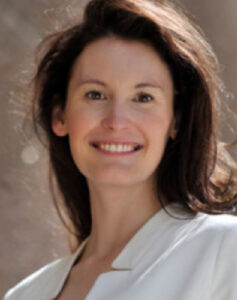 The majority of property sectors continue to benefit from significantly higher levels of leasing/demand and rent growth than at any point during the decade-long economic expansion following the Great Recession, Corbett adds.

Advisor Access spoke to Corbett about the environment in which commercial real estate operates today, the variation between the public and private markets, whether environmental, social and governance (ESG) initiatives are at risk from an increased focus on profitability, and more.

Advisor Access: Focusing on the U.S. and global economy overall, what impact is high inflation having on commercial real estate at a macro level?

Abby Corbett: While I hate to respond like the proverbial economist, I will start with setting the stage. First, it is important to frame the causality conversation with respect to inflation and commercial real estate dynamics. They each impact the other, resulting in a dynamic relationship. For example, while supply chain bottlenecks continue to play a role in driving up prices, today’s inflation is also a reflection of some of the fastest employment and wage growth that the U.S. has experienced in more than 20 years.

The strength of the labor market fueled strong consumer spending and retail sales activity, which contributed to the demand-pull-related inflationary conditions that have taken hold across global markets. In this sense, many of the factors that have led to today’s inflation continue to benefit certain sectors, with industrial and retail occupiers, for example, still expanding their footprints to catch up from the conditions of the last few years.

In some respects, the commercial real estate operating environment is slower moving, reactionary, and lags broader economic trends, and it takes time for those themes and trends to manifest throughout tenant behavior and operating fundamentals.

Meanwhile, the inflation/commercial real estate causality perspective inverts when considering the multifamily sector, which has acted as a major factor driving inflation today. Housing makes up one-third of the consumer price index (CPI), and apartment rent growth has trended in the double digits for much of the past few years.

Commercial real estate’s sectors are so interrelated and, as such, reflect the overall macroeconomic picture. Higher inflation is impacting spending on goods as consumers are forced to spend more on necessities. This reduces retailer revenue and ultimately impacts their expansion plans. High inflation also reduces discretionary spending for travel and thus reduces hotel demand (at a time when the hotel sector is being driven by transient demand as opposed to business travel). Rising inflation also reduces households’ effective income, which reduces landlords’ ability to drive multifamily rent growth.

Despite higher inflation and the Federal Reserve’s engineered slowdown in economic conditions, commercial real estate’s relatively strong demand drivers are still fundamentally in place, and the majority of sectors continue to benefit from significantly higher levels of leasing/demand and rent growth than they recorded at any point during the decadelong economic expansion following the Great Recession.

AA: With interest rates continuing to climb, how does this impact certain commercial real estate sectors over others? 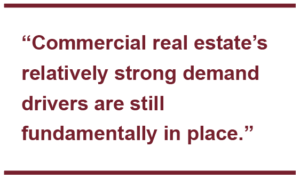 AC: Rising interest rates have placed pressure on capitalization (cap) rates, which (depending on the sector) have either plateaued or shifted up modestly, a trend we expect to continue. This ultimately reduces economic returns to investors and, everything else being equal, reduces incentive to invest in commercial real estate relative to other yield-focused investments, such as corporate bonds.

Investors targeting certain sectors that have witnessed outperformance, such as multifamily and industrial, are more likely to find themselves in a negative leverage scenario. Investors may get comfortable with this scenario over the short term, as long as they are underwriting significant growth in net operating income, but in instances where they cannot, the increased financing rates could prevent deals from trading.

In sectors where yields are higher because they have not been as aggressively targeted by investors (hospitality, retail and office), higher rates could cause refinancing issues for properties with borderline cash flow coverage. Higher rates and more conservative lending also could push investors toward assets that are viewed as “safer” and thus more easily financed, such as grocery-anchored shopping centers.

AA: Are you seeing wider spreads between public and private real estate investment trust (REIT) valuations? If so, what’s causing the differentiation?

AC: Yes, REIT valuations tend to react to periods of economic turbulence with more volatility than private markets, and that continues to be the case now.

The Nareit All Equity REIT index is down about 19% from its peak at the end of 2021, and as a result of this correction, we are observing significantly higher implied cap rates for REIT portfolios compared to cap rates being reported for privately held institutional commercial real estate portfolios, such as NCREIF.

As the risk of recession has risen, we’ve seen a market-wide selloff across all segments, not just public REITs. Higher interest rates have also been weighing on the relative yield competitiveness of REITs relative to corporate bonds, thus presenting other asset classes as potentially more attractive.

In addition, public market investors tend to view REIT stocks in the same vein as other high dividend stocks, such as utilities, and not based on their net asset value. So, as interest rates began precipitously rising, we started to see the decline in REIT stocks. However, fundamentals and net operating income growth across most public REIT property types remain strong.

AA: What are some trends you are starting to see in M&A?

AC: While the diverging fortunes in the private and public CRE markets should drive REIT privatization opportunities, higher financing costs and economic uncertainty add complexity to any large M&A transactions in the current environment.

AA: Do you see any possible recession as precipitous and long-lasting or more of a much anticipated correction?

AC: I think a recession is increasingly likely, with several leading economic indicators having weakened recently, including initial unemployment claims, housing permitting and consumer confidence. We’ve also seen a fading in the economic boost from the extraordinary levels of fiscal stimulus provided during 2020–2021. And all of this is unfolding as the Fed has begun tightening monetary policy to combat inflation brought on by supply shocks. 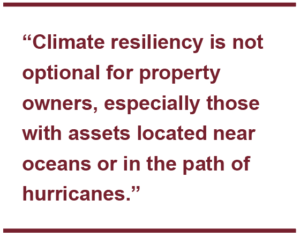 There’s certainly a number of signs that suggest that if a recession takes hold, it’s not likely to be particularly deep or long lasting. Savings in U.S. bank accounts surged by $5 trillion or almost 40% during the pandemic. Even as rising inflation has stressed household budgets, Americans have largely retained this savings stockpile.

Meanwhile, households spent much of 2020 and 2021 paying down debt with excess savings accrued during the pandemic, and there are few major imbalances on household balance sheets with respect to credit. So, the consumer is in pretty good shape. However, national debt has risen dramatically, which means fiscally we are in a much tougher spot than we were heading into prior recessions.

The Fed is in a precariously difficult position, with little fiscal room to navigate. It has utilized fiscal stimulus and easing to correct course in past cycles; however, we’re now facing a synchronization of both low growth, high inflation and higher relative debt levels. I have a hard time believing the pundits saying that this recession is going to be as mild as they may think, given the convergence of factors facing the economy and the Fed right now.

If anything, the “silver lining” of the prevailing strength of the consumer may indeed be the source of trouble for the Fed. Households do have a nice buffer, which will accentuate the demand side, but as supply-side shocks remain, and thereby prolonging stagflationary conditions, the Fed will have little room to intervene.

AA: What happens to ESG initiatives within real estate as the focus ratchets down on profitability in times like these?

AC: Climate resiliency is not optional for property owners, especially those with assets located near oceans or in the path of hurricanes. Weather events are expected to grow more severe in the coming years and investments in climate-related initiatives are imperative for existing owners.

Certainly, the capacity for various owners to face this harsh reality varies considerably. But the most prepared-for and resilient properties will be able to withstand climate-related challenges the best, thereby protecting their income streams by being positioned to provide consistent shelter to their occupants, tenants and guests. These assets will also be better positioned to maintain their valuations to ultimately attract more investor interest on exit.

We do not see major reductions in commitments to ESG materializing, as modernizing properties to perform well in the 21st century economy remains critical to tenant attraction and retention.

AA: Thanks, Abby, for your insights.

Abby Corbett currently serves as managing director, senior economist to CoStar’s Market Analytics group. She is responsible for leading a team of market economists and analysts and well as leading CoStar’s national analytic coverage. Prior to CoStar, she acted as the director of research for two institutional private equity investment managers. In these positions, she created and led their research platforms while guiding investment strategy for both firms’ domestic and international portfolios. Prior to her private equity positions, Ms. Corbett served as global economist for CBRE where she was the primary economist supporting Dr. Raymond G. Torto, Ph.D, CRE. At CBRE, she served as a member of the Global Research and Consulting Executive Committee, responsible for building out the global research platform. She holds a Master’s in Economics from the University of Wisconsin Milwaukee with further master’s level education in real estate finance, construction and development from both MIT and the University of Denver.