The REIT Newsletter for Advisors • Fall 2016

The National Association of Real Estate Investment Trusts (NAREIT®) is the worldwide representative voice for REITs and publicly traded real estate companies with an interest in U.S. real estate and capital markets.

The Federal Reserve and interest rates have been in the news, and recent developments have at times been accompanied by price swings in financial markets, including share prices of Equity REITs. Some investors have expressed concerns about the impact of future rate increases on REITs. There are both advantages and disadvantages, however, in the outlook for REITs in a rising rate environment.

Advisor Access: Why is there so much attention to the links between interest rates and REITs? 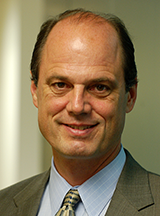 CS: I’d expect only a modest effect, for several reasons. To the extent the dividend payments resemble the coupon payments on a 5-year or 10-year bond, then the impact of rising rates on REIT share prices should be no greater than the corresponding movement in bond prices. Sometimes, though, movements in REIT share prices have been greater than this, suggesting that there was some overreaction. Indeed, we have often seen initial price moves in response to interest rates are subsequently reversed. Also, other than their high dividend payments, other aspects of REITs are totally different from fixed income. Their dividends aren’t fixed, they rise with REIT earnings. Dividends per share increased 23 percent over the past five years.

Furthermore, unlike bonds, which have a fixed principal value, the underlying assets that REITs own—commercial properties—typically rise in value. 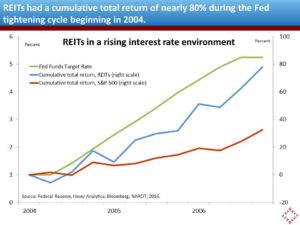 The impact on interest expense is also likely to be minor. REITs use predominantly long-term debt, so they have locked in low rates for several years. Also, since the financial crisis REITs have reduced their leverage considerably, as they have used much more equity and less debt to fund property purchases. Total shareholder equity of all Equity REITs, including both common and preferred equity, was 43 percent of book assets as of 2016:Q2, compared to 33 percent on the eve of the financial crisis. Debt to book assets, in contrast, declined from 57 percent to less than 50 percent over this same period. Reduced reliance on debt funding limits REITs’ exposure to future interest rate increases.

CS: What are the advantages in the outlook?

“…growth in REITs’ earnings may more than offset any possible negative effects of rising rates.”

CS: If the economy continues to grow, even at the relatively subdued pace we’ve seen over the past few years, then growth in REITs’ earnings may more than offset any possible negative effects of rising rates. Funds from operations (FFO) of All Equity REITs has been rising at a double-digit rate since 2010. [See T-Tracker: https://www.reit.com/data-research/data/nareit-t-tracker-quarterly-total-return-index-series] Vacancy rates continue to trend down in most major property sectors, allowing rents to march steadily upward. Construction remains in check, although it has been ramping up and bears watching in the years ahead. Overall, there may actually be more upside in the REIT sector than downside.

AA: How did the latest FOMC announcement affect the outlook for interest rates?

CS: The Fed left rates unchanged but is clearly getting ready to act soon. The FOMC (Federal Open Market Committee) press release stated that the case for higher rates has strengthened with recent positive news on the economy and the job market. Indeed, three members of the FOMC dissented in favor of an immediate increase.

What’s more important, though, is that the Fed appears to be nearly unanimous in the view that rate increases will be gradual, spread over the course of several years. Interest rate policy is shifting from stimulative to neutral, but not to a restrictive policy stance. If this were an automobile, they’d be easing off the accelerator, not slamming on the brakes.

AA: How have REIT share prices responded to past tightening cycles by the Fed?

CS: REITs performed quite well in the most recent Fed cycle in 2004-2006, when the Fed raised their target for short-term interest rates from 1 percent to 5.25 percent. REITs posted a cumulative total return of nearly 80 percent, outperforming the S&P 500 by a wide margin. The critical factor during that rate cycle was that solid rent growth and high occupancy rates drove earnings upward over the entire period.