The REIT Newsletter for Advisors • Fall 2019 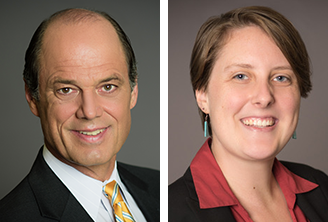 By Calvin Schnure and Alexandra Thompson

There has been no shortage of troubling news on the economy. Trade wars are in the headlines and are already having an impact on certain sectors. For example, total U.S. exports fell at a 5.2% annual rate in Q2/19, shaving more than a half-percentage point from gross domestic product (GDP) growth, in sharp contrast to the positive contribution that trade made in 2018. Manufacturing firms have borne the brunt of the problems, and manufacturing output fell 3% at an annual rate in the second quarter.

But the U.S. economy includes more than manufacturing and exporters, and is less exposed to export markets than most other countries. As a result, many of the main economic indicators are holding up, including continued job growth and rising retail sales.

The commercial real estate sector has few direct links to foreign countries and today’s trade wars, and the growth of domestic demand for leased space has helped keep the sector growing. REITs have benefitted from this demand; for example, occupancy rates of properties owned by REITs rose to a record high of 94.1% in the spring (Chart 1; see the Nareit T-Tracker® for this chart and more data on the operating performance of REITs). Additionally, in contrast to many firms in the S&P 500, REITs have low exposures to import and export markets, as their business is driven by domestic commercial real estate markets. This domestic focus has sheltered REITs to a certain extent from the trade war risk. 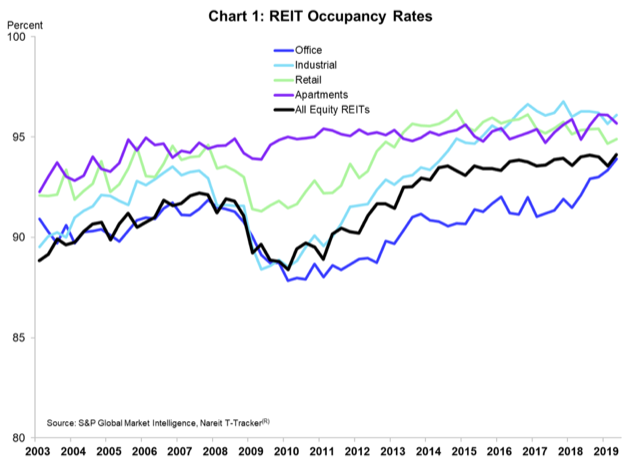 REITs have outperformed the broader U.S. equity markets in 2019, in part because of their reduced vulnerabilities to trade shocks. REITs delivered a total return of 28.5% through Sept. 30, well ahead of the 20.6% performance of the S&P 500.

There’s another benefit to investing in REITs. Holding REITs in a diversified portfolio has not only boosted returns this year, it has also reduced risks. Correlations between the S&P 500 and Asian stock markets spiked higher as the trade wars escalated in the spring. Chart 2 shows how, relative to a baseline measurement from 2013 through 2016 (light blue bars), correlations of the S&P 500 with the Chinese, Japanese, Hong Kong, and London markets rose sharply in April and May (dark blue bars). Exposures of U.S. equities to global shocks linked to Chinese markets have remained elevated through September, although correlations with Japan and London have retreated (grey bars). 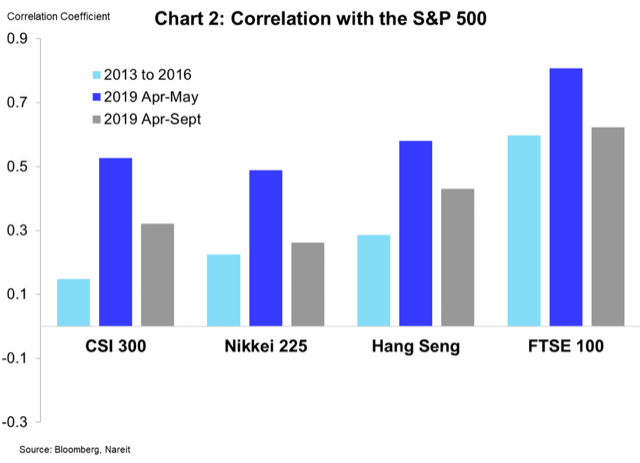 REITs have been a safe haven from these global shocks. Chart 3 shows the correlation of the FTSE-Nareit All Equity REITs index with the Asian and London markets, as well as with the S&P 500. Correlations in the spring, as trade wars heated up, were well below the 2013–2016 baseline, but have subsequently moved back toward baseline levels. But the exposure of REITs to global shocks is far lower than exposures of general corporate equities, as these correlations are a fraction of the level of correlations of the S&P 500 with overseas markets. 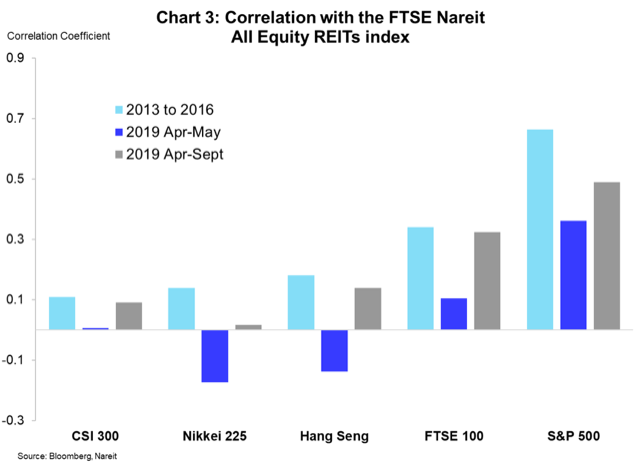 This low correlation, of course, makes perfect sense—and is why it is important to include REITs in a diversified investment portfolio. The economic forces that affect the demand for domestic U.S. commercial real estate differ from those affecting global corporations, and stock returns reflect these differences. Investing in income-producing real estate can not only boost portfolio returns, it can also reduce risk during turbulent times like today.

Calvin Schnure is Senior Vice President, Research & Economic Analysis, and joined Nareit in March 2011. He analyzes developments in the macro economy and their impact on REITs and commercial property markets, and on financial returns to REITs. He monitors performance of mortgage REITs and conditions in the U.S. mortgage market. He also conducts original research on REITs’ stock market returns and economic fundamentals. Mr. Schnure began his professional career in the 1990s as an economist at the Federal Reserve Board. While at the Fed he analyzed the non-bank financial sectors for the Flow of Funds Accounts, corporate profits and commercial paper markets in the Capital Markets group, and also analyzed business fixed investment, including capital spending on nonresidential structures, for the Fed’s economic forecast. Subsequently he was vice president for US Economics at JPMorganChase, where he analyzed and forecast economic and financial market conditions, and advised senior management and clients. He was senior economist at the International Monetary Fund from 2002 through 2006, and director of economic analysis at Freddie Mac from 2006 through 2011. Mr. Schnure earned a bachelor’s degree in Economics from Williams College, a master’s degree in Law and Diplomacy from the Fletcher School at Tufts University, and a PhD in Economics from the University of California, Berkeley.

Alexandra Thompson is Senior Manager of Research & Industry Information for Nareit. She focuses on data management and analysis in relation to trends within REITs, real estate and the broader macro economy. She works on the Nareit T-Tracker®, Commercial Property Update, and Nareit’s annual benchmark for size of the commercial real estate market. She also provides analytical support on over 175 companies for the FTSE Nareit Global Real Estate index. Ms. Thompson presented at the ARES annual conference in 2019 for research she coauthored titled Apartment Markets and the Cascade of Demand. Ms. Thompson earned her bachelor’s degree in Economics and Statistics from George Washington University in Washington DC.