The REIT Newsletter for Advisors • Summer 2020

Calvin Schnure is Nareit’s senior vice president, research & economic analysis. He analyzes developments in the macro economy and their impact on REITs and commercial property markets, and on financial returns to REITs.

The Value Proposition of REITs 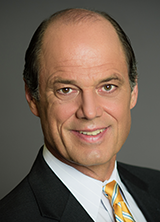 The social distancing measures designed to slow the spread of COVID-19 resulted in a sudden and near-complete shutdown of many businesses across the economy. Many of these businesses may struggle to pay their rent in the months ahead, resulting in cash flow difficulties for many landlords. In addition, since late March, tens of millions of workers have lost their jobs, causing the unemployment rate to spike higher, toward levels not seen since the Great Depression.

The sharp deterioration of business conditions will have negative impacts on commercial real estate markets and REITs. Indeed, demand for leased space weakened in the first quarter of this year, even though the crisis only intensified in the final weeks of the quarter. Conditions will likely continue to worsen in the months ahead, until the economy can begin resuming more normal operations.

The impact of the social distancing and business closures varies widely across real estate and REIT sectors, and for some, the effects are severe. Others, however, are less directly affected by the crisis. REIT stock market performance since the crisis began reflects both the magnitude of these risks and also the differences across property types. The REIT sector overall entered this period, however, from a stronger position than in previous market downturns, in terms of operational performance, balance sheet strength and sources of liquidity available for the potentially lean months ahead. This financial strength provides support for the medium- and long-term outlook for investing in REITs.

The Macroeconomy and Commercial Real Estate

The first wave of effects of the COVID-19 crisis were on the travel, lodging, restaurant and entertainment businesses. Stay-at-home orders caused most activity in these areas to come to a sudden stop, resulting in large numbers of business closures and layoffs. Another early casualty was the retail sector, as consumers avoided shopping in public places for all but essential items like food and pharmaceuticals. Online sales and delivery services, including grocery deliveries, saw a surge in business, while less urgent purchases were postponed or canceled. Many non-essential medical services were delayed or deferred, idling many doctors, dentists and other healthcare providers.

The shock to businesses and labor markets has been quicker and sharper than in any prior downturn in U.S. history. The unemployment rate rose from 3.5% in February to 4.4% in March, before skyrocketing to 14.7% in April. By comparison, the unemployment rate topped out at 10.0% during the Great Financial Crisis in 2008–2009. The economy shrank in the first quarter (Q1), with gross domestic product (GDP) declining at a 4.8% annualized rate. The worst-hit sectors in Q1, which again only reflect the opening weeks of the crisis, included food service and accommodations, healthcare, travel, auto sales, and clothing and footwear.

Business closures and layoffs have continued into the second quarter. News reports indicate the impact has spread beyond those relatively narrow sectors affected in the early rounds. Future reports on the job market and economic growth are likely to show further deterioration before moving toward recovery. Yet, with many states preparing to ease restrictions on social activities, it is possible that such a recovery will begin in the latter part of this year.

Demand for leased commercial space in the office, retail, apartment and industrial sectors nationally (that is, not just REIT-owned properties but all properties, including private owners) weakened in the first quarter. Vacancy rates edged higher, and rent growth decelerated. The changes in the first quarter of 2020, compared to the fourth quarter of 2019, however, were modest, and by themselves would not be too alarming. Vacancy rates remain near recent lows, and rent growth was positive on both a sequential and four-quarter change basis for all property types. The fact that these abrupt changes in market conditions, which occurred due to social distancing and business restrictions that took place only in the closing weeks of the quarter, were manifest in the full quarter numbers warns that demand for commercial real estate, vacancies and rents in the second quarter has deteriorated much more rapidly.

REITs Have Many Sources of Resilience

Overall, the REIT sector entered this crisis with strong balance sheets and ample sources of liquidity. REITs raised $440 billion in equity capital from 2009 through 2019. REITs used these funds to finance acquisitions of additional properties, and they relied more heavily on equity capital than on debt. As a result, leverage ratios at the end of 2019 were at or near the lowest in more than two decades. REITs also lengthened the maturities of their debts, from a weighted average of less than 60 months in 2008 to 83 months, or nearly seven years, at the end of 2019. Longer debt maturities and a laddering of maturities have reduced the need to refinance debts in the months ahead. Having a strong financial condition at the start of any crisis improves the REIT sector’s ability to manage the challenges posed by the COVID-19 crisis.

Looking across the REIT universe, we find most have a healthy liquidity position, with nearly 90% of REITs (by assets) possessing a cash and untapped line of credit ratio greater than three.

The business closures among front-line sectors fed directly into stresses in commercial real estate markets as tenants had difficulties making their rent and mortgage payments. Nareit conducted a survey of its membership, asking what percentage of typical rent payments they had received from tenants in April. Retail sectors reported a significant shortfall in payments. Free-standing retail, which includes tenants such as pharmacies and banks, collected 70% of typical rents in April. Shopping centers received about half of typical rents, with some support from grocery stores even as many other stores shuttered. There were too few responses in the mall sector to report representative results, but other sources indicate collections were low, as many malls closed in April. Rent payments received in the healthcare sector were slightly less than 90% of typical, as medical office buildings saw a decline in payments while other parts of the healthcare sector (senior housing, skilled nursing and hospitals) were more stable.

Payment levels were well maintained in other property sectors, however, with the office, residential and industrial sectors reporting collections above 90% of typical levels. Offices have longer-term leases, and tenants in REIT-owned properties tend to have greater financial strength to continue making payments. Similarly, REITs own higher-quality apartments than the national average, and have tenants with higher income levels and perhaps greater job security in the current environment. Industrial properties have little face-to-face interaction with clients and were less impacted by stay-at-home orders.

Total stock market return on REITs (capital gains and losses, plus income from dividends) turned sharply negative as the public health crisis worsened and social distancing measures and business closures began to impact the economy. All equity REITs had a total return of –7.0% in February and –18.7% in March. Markets stabilized a bit in April, and recovered some of the earlier losses with an 8.8% gain. 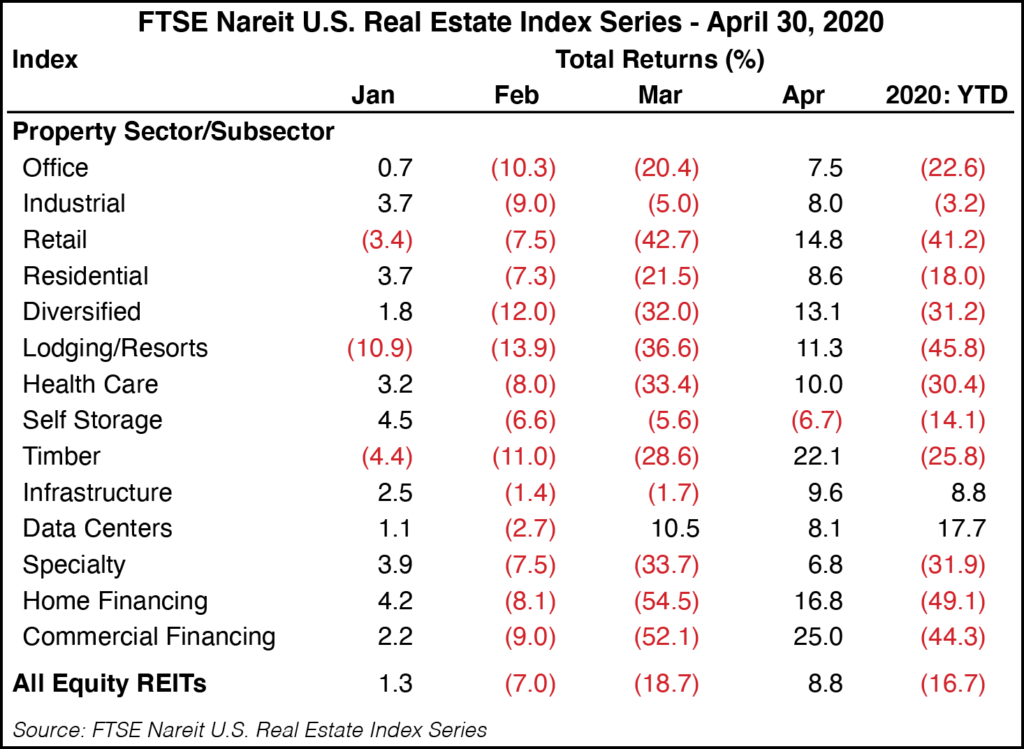 The impact of the crisis varies widely across REIT sectors. Some, including lodging/resorts and regional malls, have experienced an acute loss of business and cash flows. Lodging and resort REITs had experienced a –45.8% total return year to date, as of April 30, and retail REITs had a year-to-date return of –41.2% (far right column of table). Similarly, mortgage REITs (mREITs) have similarly come under significant pressures, with a –49.3% total return for home financing mREITs and –44.3% for commercial financing mREITs.

Other sectors, including office and residential REITs, have been less impacted, but do face concerns about future rent payments. These sectors are somewhat protected by having longer lease terms and tenants generally on stronger financial footing prior to the crisis. These sectors have had total returns in the range of –20% in the first four months of the year.

Some sectors, however, have fared well in recent months. Data centers and infrastructure, which have little face-to-face interaction with customers and may experience a possible tailwind from increased demand for digital communications, did not experience the double-digit declines in February and March that hit some other sectors, and remain in positive territory as of the end of April.