In this Q&A, Quinn Kiley, senior portfolio manager for Tortoise, tells Advisor Access that the energy sector has responded to recent black swan events with discipline and a renewed focus on clean and renewable resources, including natural gas, solar and wind power, and hydrogen. 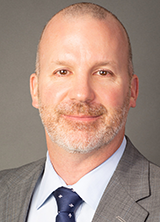 Advisor Access: 2020 has been an outlier in many ways. How has that translated into the energy industry?

Quinn Kiley: We entered the year with oil priced near $60 per barrel, and the United States was the largest producer of oil and natural gas in the world. Prices had been supported by strong economic growth globally and agreements between OPEC and Russia to reduce production.

Both of these supports were upended early in March. The outbreak of the COVID-19 pandemic shut down economies, destroying demand for energy. Coincident with this biological crisis, Saudi Arabia and Russia began a price war, removing those previous production cuts and flooding the world with crude oil.

The result of these double black swan events was excess supply and insufficient demand. Global inventories for crude oil, refined products, and natural gas built at alarming rates and put severe pressure on commodity prices. In that environment, energy securities saw unprecedented price declines. Prices for securities and the commodities bottomed in March and April, and slowly reversed as economies reopened around the world. Importantly OPEC and Russia reinstated production cuts, and producers around the world cut production for economic reasons, as low prices did not support previous levels.

AA: How have energy companies responded to this new environment?

QK: The industry has been suffering under a lower commodity price environment for the last five years. During that time, investors have pressured management teams to focus on strong balance sheets, capital discipline, and free cash flow generation. Previously, the U.S. industry had been focused on growth of production. In a low-price regime, much of that previous capital was destroyed.

Even before COVID-19, management teams had received the message: Capital expenditure outlooks were lowered and debt was being paid down. The crisis accelerated these trends. The capital plans for oil and gas producers was lowered another 35%, bringing the year-over-year comparison down over 60% compared to 2019. Companies are signaling a further 20% reduction in 2021. These decisions by producers have midstream and downstream implications as well, and the overall industry is seeing greater discipline in capital spending.

AA: You mentioned that the COVID-19 crisis accelerated already ongoing trends. Can you expand on that?

QK: We have been forecasting a free cash flow inflection in 2020 for some time, and these reduced capital plans improve the free cash flow outlook for the energy companies we invest in.

The big question for management teams is, what to do with your excess cash flow? First, we believe free cash flow should fund the equity portion of any capital projects you move forward on. Second, cash should be directed to paying down debt when leverage is too high. Third, once a company reaches appropriate leverage levels, cash should be returned to investors through a combination of dividends and share buybacks, to the extent those shares are undervalued.

The pace of all these actions has ticked up this year, and although energy equities have not recovered with the broader market, these actions set up an attractive value proposition in the energy space. 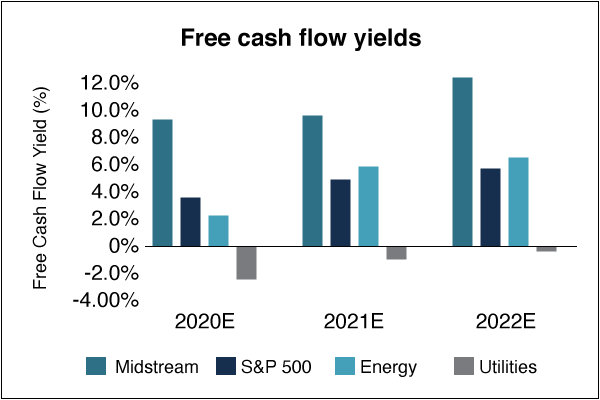 AA: What other trends are you seeing in the energy space?

QK: The global economy is in the middle of an energy transition. With the advent of hydraulic fracturing in the U.S., cheap abundant natural gas has supplied growing demand domestically through our world-class pipeline infrastructure, and abroad through the export of liquefied natural gas. Natural gas has long been a cleaner alternative to burning coal or diesel to produce electricity. We think the recent price advantage of natural gas to coal and diesel will be persistent and continue to outcompete these fuels on a global level. 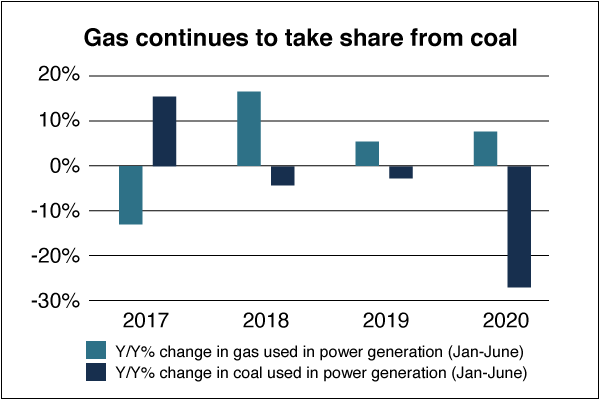 As of 7/14/2020. Source: EIA. Projections on this page are shown for informational purposes only and no guarantee of future outcomes. 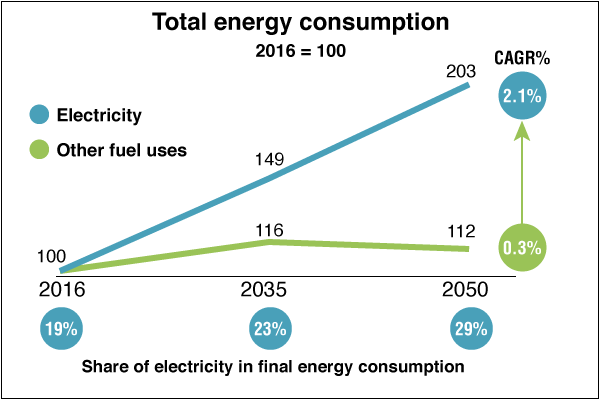 Source: McKinsey. Projections are based on industry estimates and are no guarantee of future outcomes.

QK: The energy transition has been, and will continue to be, a phenomenon measured in decades, not years or quarters. That said, the industry clearly knows where the puck is heading, toward a lower carbon world in which a cleaner energy future can lift people out of poverty and literally out of darkness.

We have noted many recent instances where traditional energy companies are announcing big plans to address this transition. For example, BP plc (BP: NYSE), one of the ten largest integrated oil companies (IOCs) in the world, has announced plans to get to net zero carbon emissions by 2050. BP describes this plan as a way to transition from an IOC to integrated energy company (IEC). BP will use cash generated by its current energy business to invest in the new strategy—for example, building 50 gigawatts of net renewable generating capacity by 2030.

A traditional midstream pipeline company, The Williams Companies, Inc. (WMB: NYSE), announced on its second quarter earnings call a plan to reduce its overall greenhouse gas emissions by 56% from 2005 levels by 2030. It plans to meet this goal by sourcing renewable gas for its pipelines and developing $400 million of solar projects on company-owned land.

Even refiners, the largest single consumer of crude oil, have announced a string of projects converting traditional refinery units to produce renewable fuels at those same facilities. The overarching theme here is that the strong cash flow profiles from traditional energy assets can provide funding for the energy transition.

AA: This transition sounds exciting, but as you said it will take decades. How does someone invest in energy today?

QK: As I mentioned, energy has not recovered with the broader equity markets, and is among the worst performing sectors in the S&P 500 year to date. In our view, there is opportunity today in many of the traditional subsectors of energy.

At Tortoise we invest across the energy value chain, and that is a broad array of companies. There are opportunities at the wellhead, but it is very commodity-price sensitive, and geography matters. Midstream companies have derisked their business models by shifting their contracts toward more fee-based revenues, improved balance sheets, and new governance models. Refiners are clearly a play on the economic recovery, as society returns to some semblance of normal. Utilities may be challenged in a rising rate environment but have underperformed recently despite the resilient nature of their revenues, given their ability to pass costs through to their customers. Power producers are leading the adoption of solar and wind generation across the globe.

Each of these subsectors can benefit from the increased importance of natural gas, renewable, and clean energy in the coming years. More immediately, valuations today reflect an attractive value proposition in our view.

AA: If you look into your crystal ball, is there a developing area of energy the broader public might not be aware of?

QK: One area of interest that generalist investors are getting excited about is the potential growth of hydrogen as an energy fuel. Hydrogen is the most abundant element on earth. If it can be harnessed as a zero-carbon fuel, it could have a huge impact on achieving a low carbon future.

There are three types of hydrogen: grey, blue, and green. Grey hydrogen is the separation of the hydrogen molecule from natural gas and, in some cases, coal. Hydrogen is used in the energy or chemicals business, but the process produces CO2 emissions. Blue hydrogen is similar, except the CO2 is captured and sequestered, reducing the carbon emissions. Green hydrogen uses electrolysis to break water molecules into hydrogen and oxygen, using 100% clean electricity.

Hydrogen can be produced at the site of use or it can be converted into ammonia and transported to every port or city in the world with existing technology. Ammonia can then be burned as a fuel for power generation. The ammonia can also be dissociated, and the hydrogen then used as a zero-carbon fuel, with its sole emission being water.

Many new hydrogen projects are underway across the globe, and if these projects can be brought to world-scale and powered by cheap, clean electricity, it could prove an important part of the energy transition. The hydrogen theme is currently predicated on cheap solar and wind power, delivering electricity at a cost-competitive price to other fuels. It is a nascent theme, but investors can access it through some oil and gas companies, utilities, power generators, and the chemical sector.

The S&P 500 Index is an unmanaged, market-value weighted index of stocks widely regarded as the standard for measuring large-cap U.S. stock market performance.

The S&P Energy Select Sector Index is a modified market capitalization-based index of S&P 500 companies in the energy sector that develop and produce crude oil and natural gas, and provide drilling and other energy related services. Returns include reinvested dividends.

The S&P Utilities Select Sector Index is a modified capitalization-weighted index. The index is intended to track the movements of companies that are constituents of the S&P 500 in the utility sector (as defined by the Global Industry Classification Standard).

Mr. Kiley joined Tortoise in 2005 through a predecessor firm and is a senior portfolio manager for the Tortoise MLP & Energy Income Fund and the Tortoise MLP & Energy Infrastructure Fund, both open-end mutual funds. Additionally, he serves as portfolio manager for the Fiduciary/Claymore Energy Infrastructure Fund, a closed-end mutual fund. He previously served as vice president of corporate and investment banking at Banc of America Securities in New York, and was responsible for executing strategic advisory and financing transactions for clients in the energy and power sectors. Mr. Kiley graduated from Washington and Lee University with a Bachelor of Science with honors in geology, and also earned a Master of Science in geology from the University of Montana, and a Master of Business Administration from the Kelley School of Business at Indiana University. Additionally, he earned a Juris Doctorate from Indiana University School of Law, and was admitted to the bar in New York. He serves on the finance committees of Rossman School and the Magic House.