The REIT Newsletter for Advisors • Summer 2018 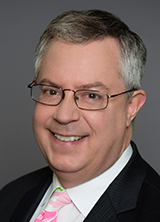 When the iconic “Stocks, Bonds and Bills” chart was first published in 1976, its failure to include REITs could not have been a surprise: REITs had existed for just 15 years, and their returns had been measured for just three. Nor would your clients have cared: at the end of 1975 the 12 REITs available on major stock exchanges were collectively worth just $275 million, and their annual returns over the three years of available history had averaged -5.07 percent.

How things have changed: In the 42 years since then, REIT investors have been rewarded with returns averaging an astounding 13.5 percent per year. The industry itself has grown even more impressively, at 22 percent per year, and the 181 REITs listed on major stock exchanges at the end of 2017 were worth more than a trillion dollars. Investors from the smallest retail accounts to the largest pension funds and endowments have taken notice.

And they should. REIT returns are driven by the real estate market cycle, which is different from the “business cycle” in that REITs give investors valuable asset class diversification even though they’re bought and sold through the stock market. That’s why, for example, REITs outperformed the NASDAQ by more than 95 percent during 2000 and 2001: REIT investors gained 44 percent while NASDAQ investors were losing 51 percent following the collapse of their hopes that dot-com companies would finally start generating profits.

It’s not just their diversification benefits that have caused investors to focus on REITs: It’s their record of long-term performance, too. Take a look at today’s “Stocks, Bonds, Bills, and REITs” chart. It actually had to be extended upward to accommodate the growth of an account balance invested in REITs. A single dollar invested in the S&P 500 stock index at the end of 1971 would have grown to slightly more than $103 by the end of 2017, but the same dollar invested in REITs—even before their early-1970s downturn—would have grown to nearly $173, giving your clients a balance nearly 68 percent larger. 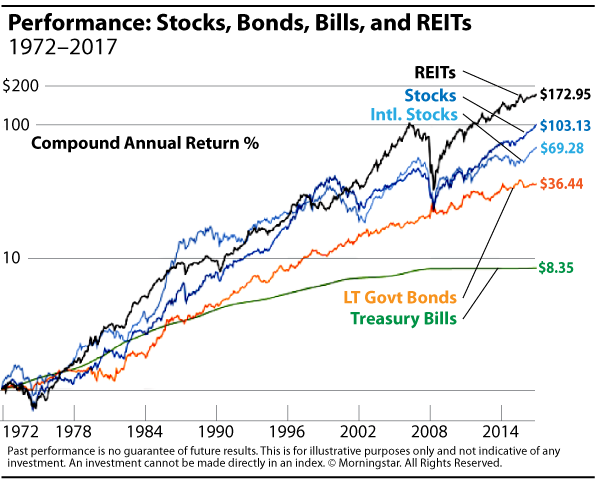 What accounts for such a dramatic difference in long-term performance? My answer is this: REITs have professionalized the management of a large asset class, and investors are continuing to reap the rewards of that massive upgrade. Institutional investors have owned income-producing real estate for decades, but until REITs came of age the typical approach to real estate investing was essentially bureaucratic: buy a building, then sit back and wait for rent checks.

REITs revolutionized that approach. Look at self-storage facilities, which were a sleepy property type—in fact, they were considered “not of institutional quality”—until REITs like Public Storage started showing how effectively they could be managed. Over the 24 years they’ve been tracked separately, storage REITs have produced total returns averaging 15.79 percent per year. Or look at manufactured home communities, which also used to be dismissed: Over the same period, REITs that own them have returned 12.01 percent per year.

Even those property types that have long sat underappreciated in big pension fund portfolios seem to have gained mojo under REIT management. Institutional investors have owned industrial facilities forever—but they never achieved anything like the 20.58 percent returns that industrial REITs earned during 2017 by re-envisioning warehouses for the e-commerce age. Same thing with timber REITs, which earned their investors 2017 returns of nearly 22 percent.

Producing strong long-term total returns consistently over an available history of more than 45 years requires more than just grabbing some available assets.  Anybody can gain exposure to the real estate market cycle by buying properties—but achieving the kind of wealth expansion shown in the iconic “Stocks, Bonds, Bills, and REITs” chart requires the kind of superior asset management that has consistently differentiated REITs from other companies in the stock market.